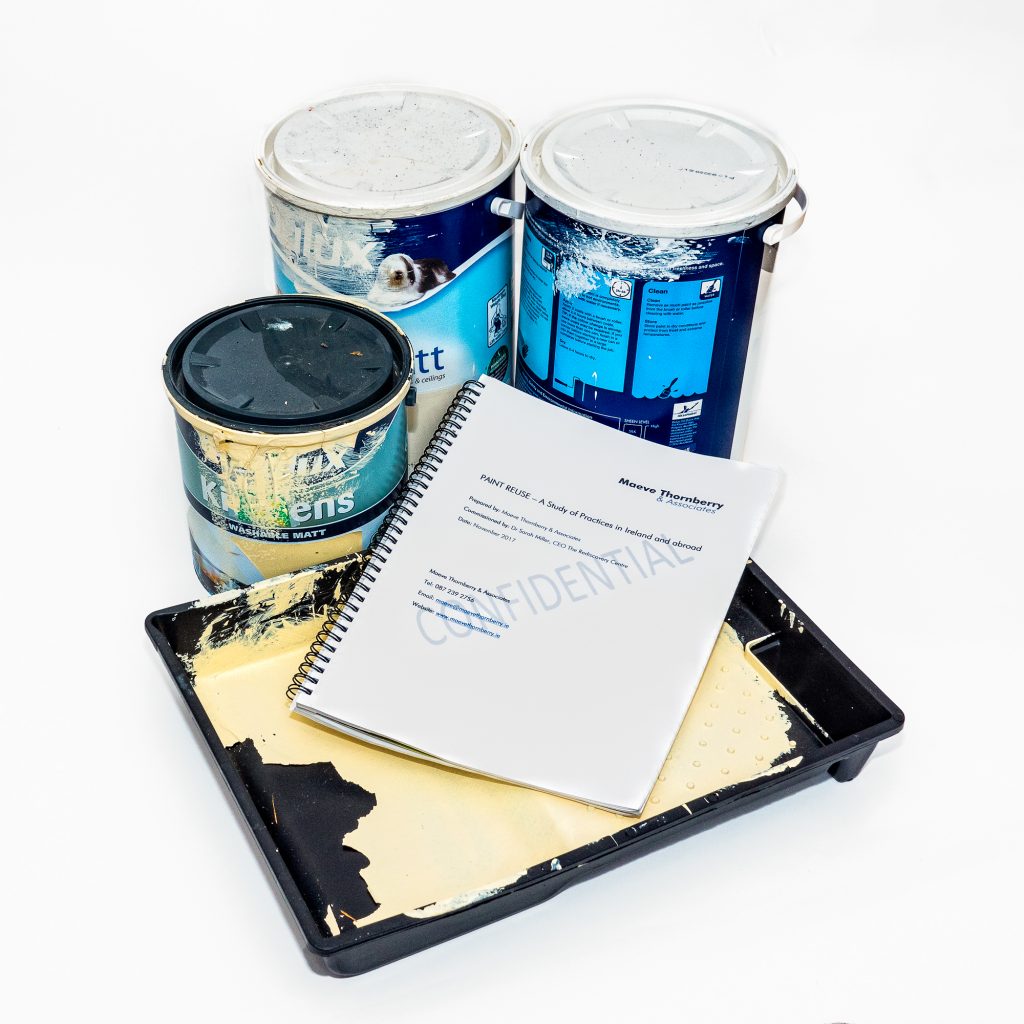 I was commissioned by the Rediscovery Centre to research and write a report on paint reuse, practices and policies, both here in Ireland and further afield, to complement an ongoing
project. It was a fascinating field to research, revealing a particularly complex area in reuse, with a multitude of factors affecting the percentage of paint that is reused globally.

Testimonial from Dr Sarah Miller, CEO of the Rediscovery Centre
“Maeve has been an invaluable consultancy/resource for the Rediscovery Centre. Working with us recently on a paint reuse project, she was quick to grasp the project requirements and to design and deliver outcomes appropriate to the task at hand. Her research capability is exceptional and she is an absolute professional. I look forward to continuing to work with Maeve in the future and highly recommend her for any research consultancy role”.

During 2016/2017 I took on the role of Network Co-ordinator for Community Reuse Network Ireland providing maternity leave cover. Starting in this role meant getting up-to-speed very quickly on the whole area of reuse. 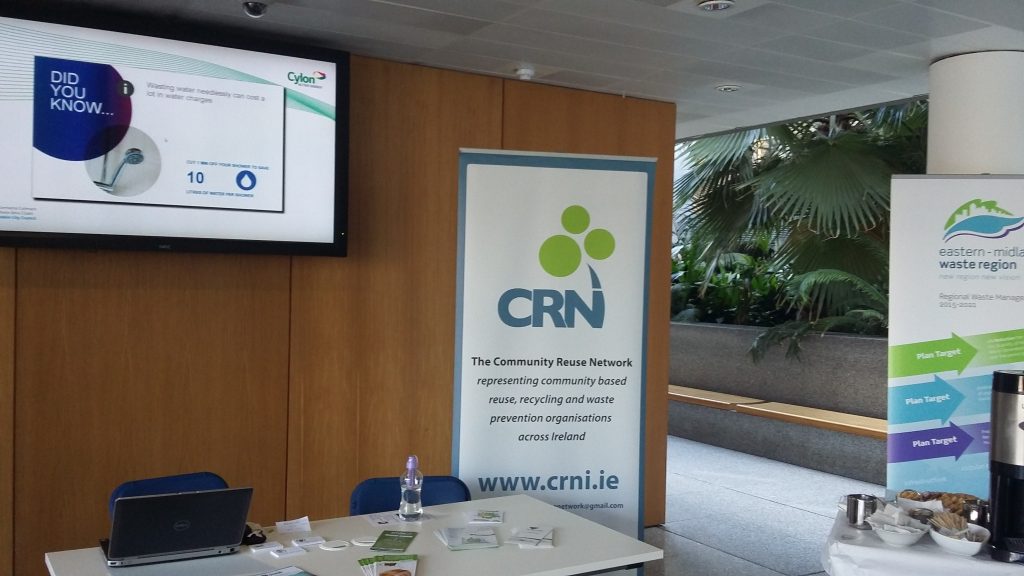 The network of members, mainly social enterprises, provides a wide range of reuse and recycling services, together with valuable training and employment opportunities in their local communities.
The role was both interesting and challenging and involved working closely with the CRNI member organisations and engaging with a number of stakeholders, such as the EPA Resource Unit, the Department of Communication, Climate Action & Environment and RREUSE, a pan-European reuse network.

Reference from Una Lavelle, Chairperson of CRNI
“Maeve represented the Network at National conferences and seminars and always spoke with authority and confidence, delivering our message clearly and passionately. She is very process driven and methodical, which is a necessary skillset when dealing with European and national funding submissions and reporting. Work, to the highest standard, was always completed and delivered on time. She proved to be an excellent Chair at national meetings, managing all sectors and personalities with ease. She delivered all that was asked of her in the role and more”.

In both 2015 and 2016 it was a pleasure to be invited again, by Dun Laoghaire Chamber of Commerce, to be a panel judge for the EnviroCom Awards. Working with Keiron Phillips of the EPA in 2015, we judged the worthy finalists in the Environmental Performance category. In 2016, together with Aileen Duffy of SEAI, we were the judges of the Energy Management category.

Being a judge afforded me the opportunity to meet with many businesses in the Dun Laoghaire-Rathdown area, who are taking bold steps to operate on a more sustainable basis.

Since 2017, the environmental awards have been included in the overall Dun Laoghaire Chamber Business Awards.

During 2014 I was involved in the successful delivery of the Envirocom Awards, organised by Dun Laoghaire Rathdown Chamber of Commerce, to recognise excellence in environmental management by businesses in the local area. 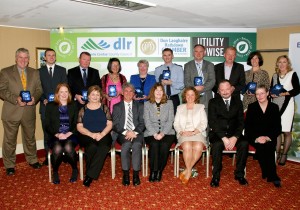 Winners at the Envirocom Awards 2014

Working alongside other members of the Organising Committee, our responsibilities included compiling marketing databases, drafting marketing/advertising documents and press releases, shortlisting the applications, arranging the judging and overseeing the final decisions, devising and managing the gala Awards dinner.

As a lay judge I was also involved in the judging of three categories which entailed site visits with the other judges and preparing detailed follow-up reports.

Being part of the team that delivered another successful Envirocom Awards was a very enjoyable and rewarding experience. More details about the awards can be found here: http://www.dlrchamber.ie/envirocom

Testimonial from Hal Ledford, Committee Chair:
“Maeve worked with me over the last year on the Organising Committee for the EnviroCom Awards 2014. The Awards are run by the Dun Laoghaire Rathdown Chamber of Commerce in partnership with the County Council to recognise businesses and agencies for their environmental achievements. She was very reliable, volunteering for a range of extra tasks and always completing them on time and to a high standard. Her work involved a range of skills including environmental analysis, event management, candidate judging, event promotion, database development, writing, research, teamwork and much more. I hope to continue working with her in the future and recommend her unreservedly”.

2013 saw the successful delivery of a comprehensive report concerning fish-box EPS. This detailed report was commissioned by Repak to ascertain the volume of fish-box EPS that needs to be dealt with annually in Ireland, the methods currently in use for disposal, and to investigate the commercial recycling options available. The summary report can be found on the Repak Prevent and Save website.

Testimonial from Repak:
“Maeve worked for Repak as a business consultant in 2013. She produced an excellent report for us that examined the problem of fish box packaging in Ireland…..Maeve understood the issues immediately, produced the report on time and on budget and gave us excellent results that we are still using to manage the problem today. We look forward to working with Maeve again when the opportunity arises”. 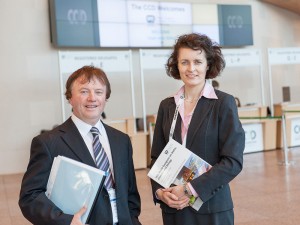 In 2013 I also worked on a sustainability-themed event; on this occasion I worked with the Chair to manage the speakers and agenda for the Sustainable Business Forum, a session which took place as part of the Greenway European Cleantech Cluster Forum during April 2013 in Dublin.

Testimonial from Ray Earle:
“Again, Maeve’s excellent skills, expertise and commitment, together with her professionalism and enthusiastic approach, made her a pleasure to work with and I hope that we have the opportunity to team up again in the future”.

A major project I undertook in 2012 was the IWA’s World Congress on Water, Climate & Energy. This inaugural event took place in Dublin’s Convention Centre and attracted more than 1,000 delegates from 60 countries worldwide. I provided extensive management assistance to the Congress Chair.

Testimonial from Ray Earle:
“Maeve worked with me as a professional and as a valued colleague during the extensive logistical, administrative and technical preparations for the International Water Association (IWA)-Water Climate Energy (WCE) Congress. Maeve’s attention to detail, concise and clear decision notes, measured diplomacy with VIPs, warm welcome to all, sound over-arching judgements and balanced opinions were invaluable at all stages pre, during and post event.”